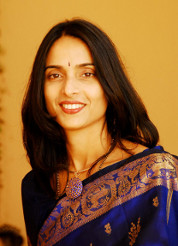 Nayana’s passion for Bharatanatyam began at a very early age. Along with being blessed with natural rhythm and grace, she studied with her Guru Natya Kala Saraswati, Smt. Jayalakshmi Alva, beginning at age eight. Over the years, she refined her talents and became proficient in this ancient art.

After achieving her Arangetram in 1994 (evaluated by Padma Bhushan Dr. Padma Subramanyam), she performed at various temple festivals and played an active role in “Navagraha”, which was produced and choreographed by her Guru. She portrayed the role of Lord Rama in Swatitirunaals’ “Ramayana”, (also choreographed by her Guru), at V.P. Dhananjayans’ ABHAI and at Kannada and Culture, Bangalore. Additional credits include playing the role of Lord Krishna in the ballet “Nrithya Govindam” and portraying the role of Goddess Parvati, in the ballet “Vasanthavalli”. According to prestigious dance critic, S.N.Chandrashekar, “The performance of Nayana, who portrayed the distraught Parvati — alternating between disappointment and triumph, anxiety and a sense of fulfillment — was worthy of a seasoned artiste”.

She is methodical and passionate about teaching this ancient and beautiful form of classical dance known for its grace, purity, tenderness and sculpturesque poses. 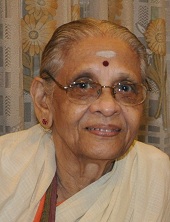 Guru Smt. Jayalakshmi Alva, was born in the year 1933 in Kumbakonam into a family of artists. She was the first and foremost disciple of Shri K.N.Dandayudhapani Pillai, destined to carry on his brilliance and command over intricate rhythm, patterns and innovative interpretations of lyrics. She trained with Smt. Swarnam Saraswati and Gowri Ammal on Abhinaya aspects and Shri Karunakar Panikar in Kathakali. Founder of the Chitrambalam Dance Centre at Bombay in 1959, she founded the Sridevi Nrithya Kendra on her move to Mangalore in 1974.

Since her Arangetram in 1948, Smt. Alva has relentlessly toiled for this great form. She has dedicated her life to its preservation in the most pristine form. She has produced and choreographed a number of dance ballets, the notable ones being, Chitrambalam Kuruvanji, Swatitirunaals Ramayana, Krishnakeerthan, Krishna tulabharam, Vasanthavalli, Balaramayana, Navagraha, Nritya Govindam, Karavali Gaatha, Panchakanya etc.

This year Sridevi Nrithya Kendra commemorates Smt. Alva’s Shatabhishekam (80th birthday) with a grand celebration. In lieu of this, the school promises year round performances, presentations, and workshops by eminent dancers and dance schools. 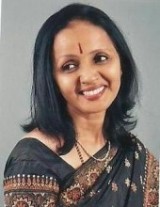 In what should be considered Lord Nataraja’s blessings, Smt. Jayalakshmi Alva is gifted with a daughter Guru Dr. Smt. Araty Shetty, who is decorated with a doctorate and qualified herself to grow in stature to emerge as a competent teacher. Today, besides being the director of Sridevi Nrithya Kendra, school founded by her parents, she is also attached to institutions like Bharatiya Vidya Bhavan.

Gifted with a rare combination of melodious voice and dancing feet, Dr. Araty can handle “Nattuvangam” ably like her mother. Having a remarkable ability to impart the knowledge of this great art, she has trained many young dancers who in turn have won acclaim in exams and competitions. Her award credits include “Nartana Nipuna”, “Karnataka Kalashree”, “Vocational Award 2004” and “Yuvak Biradiri Award”.